T-Mobile US’ subscriber base continues to grow. CEO John Legere recently told a crowd at the Goldman Sachs Communacopia Conference in New York that the “uncarrier” gained 2.1 million subscribers in the third quarter.

Even with September not quite over, this quarter’s growth is already ahead of the last quarter. Legere attributed T-Mobile US’ continued growth to the company’s multitude of new promotions and offerings, including data rollover and free streaming music. 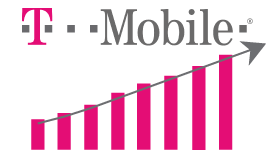 In conjunction with the good subscriber news, Legere also announced that T-Mobile US will participate in the Federal Communications Commisson’s upcoming 600 MHz spectrum auction. He said he plans to be very aggressive and that it would be a mistake for the other carriers not to participate.

“Let’s be clear, we are showing up, we are going to be very aggressive, we do have the balance sheet and we’re preparing for it, and we will scoop up as much as humanly possible,” he said. “It will be the biggest mistake any of them ever made, if they don’t show up.”

Since taking over as T-Mobile US’ head man, Legere has seen the company’s market share grow by 6%.